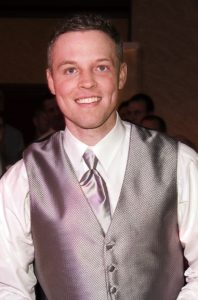 David Barns was a 2000 graduate of Goodrich High School where he achieved success in the classroom and in athletics.  David graduated with a 3.8 GPA and excelled in basketball, soccer, track, and cross country.  However, his first love was basketball.  David scored over 1,000 points and attained Honorable Mention All-State Class C as a sophomore as well as 1st Team All GAC and Academic All-State as both a junior and senior.

David’s accomplishments allowed him to continue his education and further develop his love of basketball at Grand Valley State University.  David later transferred to the University of Detroit Mercy where he played basketball and earned a Bachelor’s degree in Business Administration and a Master’s degree in Computer Information Systems.

Upon graduation, David remained dedicated to the game of basketball, and he used the values instilled in him to embark on a journey of coaching and mentoring.  David became a basketball coach at Goodrich, coaching both boys’ and girls’ middle and high school programs.  In addition to his obligations as a regular season coach, David used Saturday morning basketball clinics and his annual B&D summer basketball camps to teach skills, commitment, accountability, teamwork, and leadership skills.  David possessed a distinct ability to share his basketball knowledge and to use it as a tool to teach young people about the game on the court, but more importantly, he taught everyone lucky enough to know him about the game of life.

In addition to coaching, David regularly participated in men’s basketball leagues and relished the opportunity to play in open gyms. In March of 2011, an injury sustained in an open gym session led David to the doctor for what he believed to be a broken nose or orbital bone.  David was experiencing facial numbness and severe headaches.   However, David soon learned he was facing a much more challenging diagnosis than a broken bone; David was diagnosed with paranasal squamous cell carcinoma.  This is a rare type of sinus cancer, especially for a health-conscious young man.  David took his diagnosis in stride, relied heavily on his faith, and prepared to fight.  David endured weeks of intense chemotherapy and radiation.  After his treatment, David returned to coach the boys’ JV basketball team for the 2011-2012 season.  One of David’s remarkable gifts was his ability to continue to teach and to give himself to others even when he was fighting for his life.  David’s initial rounds of treatment were followed by several extremely complex surgeries attempting to remove the tumor.  A grave, unintended complication of one of the major surgeries was a life-altering stroke.  When others might have surrendered and given up the fight, David continued to battle and to provide hope for all who loved him.  David participated in daily physical, occupational, and speech rehabilitation for months and made extraordinary progress.  He handled every obstacle with a gentle grace and determination embodied by few.  David courageously fought his competitor, cancer, to the very end.  David passed away on November 4, 2012 at the age of 30.

David’s family is devoted to continuing his legacy.  An interview conducted while David was fighting cancer led to one of David’s greatest gifts.  David left us with this quote, “You always gotta have faith.  You always gotta have hope.  Because at the end of the day, if you have those, you will have life.”  David’s Faith and Hope for Life Foundation is dedicated to supporting and inspiring individuals enduring hardships caused by adverse medical conditions. Additionally, the Foundation aims to continue David’s legacy as a student, athlete, and coach.